As shown in figure 1-5 is the cold chamber die casting mechanism drawing, it is composed of column frame, frame, press, hydraulic, electrical, lubrication, cooling, safety protection and other components. According to the function classification of machine parts and components, we divide the cold chamber die casting machine into five categories: closing die, pressing, hydraulic transmission, electrical control and safety protection.

The following takes the MT300 cold chamber die casting machine produced by YOMATO Machinery as an example for structural analysis. 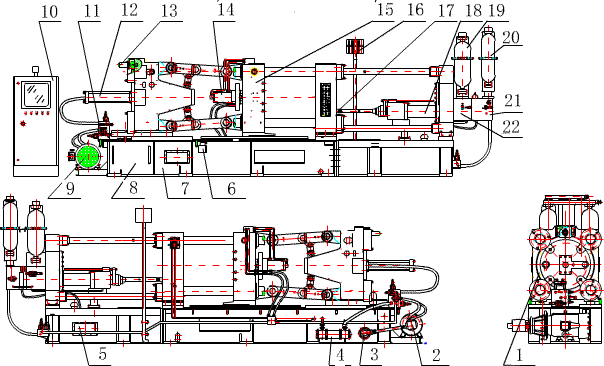 The die-closing mechanism mainly plays the role of realizing the closing, opening and locking of the mould and ejection of the product. It is mainly composed of shaped seat plate, moving seat plate, pull bar (Corinne column), elbow bending mechanism, ejection mechanism, mold adjusting mechanism and so on.

Mould-shifting force: the force applied to the moving plate when the die is closed.

Expansion force: the force that causes the mold to separate due to the pressure of the alloy cavity.

Die-shifting speed: the speed of the motion of the moving plate and the moving die in the closed open die motion. the mode shifting velocity is a variable speed process. The speed of movement should be a slow-fast-slow process of change. This can not only make the mold run safely, the casting can be pushed out smoothly, but also increase the number of cycles of the machine.

die casting machine in the design process, need to set mold adjustment mechanism to adapt to a certain range of die casting die, in the machine technical parameters, should determine the maximum die thickness size Hmax and the minimum die thickness size Hmin as the machine user selected die casting die parameters. This adjustment of the maximum and minimum die thickness is achieved through the mold adjustment mechanism. The mode adjusting mechanism is to drive the transmission mechanism with the hydraulic motor or the mode adjusting motor, so that the tail plate and the moving seat plate of the mould locking column frame move axially along the drawing bar, thus achieving the purpose of increasing or reducing the spacing between the moving and setting seat plates.

Elbow is a very important moving component of die casting machine. In order to reduce the wear of its moving pair, it is necessary to maintain a properly clean lubricating oil film on the surface of the moving pair, and excessive oil supply is as harmful as insufficient oil supply, which will produce additional heat, pollution and waste.A centralized lubrication system is used to lubricate the elbow part of die casting machine produced by YOMATO Machinery Factory Co. Ltd. The so-called centralized lubrication system is a lubricating oil with a certain displacement and pressure provided by one oil pump (mainframe for two oil pumps), which supplies oil to all the distributors on the main and secondary oil routes in the system, while the distributor distributes the oil to each lubricating point according to the required oil quantity; at the same time, the controller completes the functions of lubrication time, frequency, fault alarm, shutdown and so on, in order to achieve the purpose of automatic lubrication. Cold chamber die-casting machine elbow lubrication generally choose the pressure lubrication pump, it has the following characteristics:

An oil level detector is attached to the 2) to measure the stock of oil supply in the storage tank, timely response return, and connect the strain action.

3) the immediate need for a keystroke device, the machine at the beginning of use, immediately get the amount of oil due, reduce unnecessary friction.

4) deep into the bottom of the oil absorption, so that the oil power greatly increased, and can clear the lack of air spacing in the tubing.

The 5) is equipped with an oil pressure detection device (1~0.3 MPa) to detect the following leakage:

The failure of the pipeline can be detected by insufficient pressure in the pipe.

Obstruction of oil intake can be detected by oil turbidity.

The motor is not working properly.

When the parts are aged and the output power is poor, the pressure is insufficient.

The lack of oil can be detected in the oil barrel.

The pressing mechanism is the mechanism of pressing metal into die cavity for filling forming. It is mainly composed of hydraulic cylinder assembly, pressure chamber

In the whole process of pressing and firing, the speed and time of slow, fast and supercharging can be adjusted by the control oil valve installed on the oil circuit integrated board.

Hydraulic pump ,1) power element, which supplies pressure oil to the hydraulic system, is a device that converts the mechanical energy output from the motor into the hydraulic energy of the oil.

5) working medium - hydraulic oil through which energy is converted, transferred and controlled.

Piston accumulator is mainly suitable for large volume and large flow system, which can be used between low temperature-53℃ and high temperature 121℃, and its strength and reliability are high. the gas (usually nitrogen) and liquid of the piston type accumulator are separated by a freely moving piston that moves in a hydraulic cylinder liner and seals the gas and liquid through a sealing ring. the maximum pressurization ratio (i.e. the ratio of gas pressure to working pressure) is 1:10. The friction loss and leakage of piston should be taken into account in the selection, so it is not suitable for the system circuit with high working frequency and low pressure difference.

The air filter is generally installed on the upper cover of the main tank, which has two functions: one is as an oil injection filter, which can prevent impurities from entering the tank when adding hydraulic oil; the other is as a ventilation filter, the fluctuation of the liquid level of the tank requires air to balance during the operation of the system, which can filter the air flowing into the tank through the filter.

The tank is used in the hydraulic system to store the oil to ensure the adequate supply of the working medium of the hydraulic system, but also has the function of heat dissipation, the escape of the air that seeps into the oil and the precipitation of the dirt in the oil. There are two types of oil tank: integral type and separation type. The integral type refers to the use of the base of the main engine and so on as the fuel tank, while the separated fuel tank is separated from the main engine and forms an independent oil supply unit with the pump and so on. Usually the fuel tank is welded with 2.5~5 mm steel plate, as shown in Fig .1-11 as a small separate tank.

The working temperature of commonly used oil in hydraulic system is 40~50℃, generally the highest is not higher than 55℃, and the lowest is not less than 15℃. Too high temperature will make the oil quickly deteriorate, at the same time, the volume efficiency of the hydraulic pump will decrease; too low temperature will make the hydraulic pump difficult to absorb oil. In order to control the oil temperature, the tank is often equipped with coolers and heaters, heat exchangers are the general name of coolers and heaters.

(1) Cooler coolers can be divided into air-cooled, water-cooled and ammonia-cooled forms. Water-cooled coolers are mainly used in hydraulic systems of die-casting machines, which are generally installed in return oil circuits to avoid high pressure.

(2) The methods of oil heating in heater hydraulic system include hot water or steam and electric heating. Because the electric heater is easy to use and easy to control the temperature automatically, it is widely used.

The electrical control system gives power to the machine and ensures that the machine operates at predetermined pressures, speeds, temperatures and times.

be composed of electric motors, PLC control systems and various electrical components and electrical wiring, see Section 6 of this chapter for details.

1. protection of the pressure zone

The front safety door 8, the rear safety door 7, the movable seat plate cover 5 and the flying material baffle 6 are installed in the pressing area to prevent the danger of metal spatter during the ejection.

2) the safety door is closed, if the closing is not in place, there are two limit switches to transmit the signal to the computer, then the computer sends out the signal, the machine can not do the open-lock mode movement. 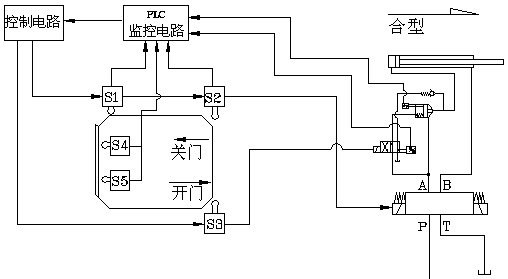